The web is a great step forward in information access but when the first web browser was built the web was tiny. Today there are over 6 billion pages on the web and the web browser is clearly not 6 billion times more efficient at augmenting our ability to deal with all this information - the web browser has not kept pace. Therefore, we state that the biggest bottleneck between the human mind and the greatest collection of human knowledge is the web browser. It's not enough to let us navigate the web through keyword searches and hand-made hyperlinks: every word needs to be deeply interactive, all words must become hyperwords.

To try the Hyperwords live, visit the project website: 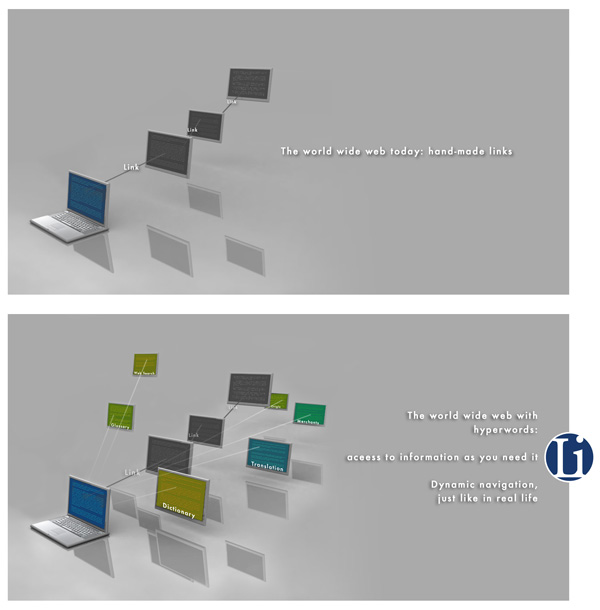 Words are important. Electronic words maybe even more so.

When it comes to the business of solving problems, written words are important as it is through words we communicate - it’s not all body language in coffee shops or board rooms - many are written.

"Words are, of course, the most powerful drug used by mankind."
Kipling, speech 1923

Words on the web are increasing far faster than our capacity to deal with them: "More information has been produced in the last 30 years than in the previous 5,000. About 1,000 books are published internationally every day, and the total of all printed knowledge doubles every eight years," according to Peter Large in Information Anxiety. Internet search engines have barely even cataloged 1/6th of the total information available and Internet traffic is doubling every 100 days (Interactive Week). Richard Saul Wurman, puts it aptly; "everyone spoke of an information overload, but what there was in fact was a non-information overload".

We get much of our words from the web (there are lot of web pages out there, Google indexes more than 6 billion. This is why it's important to improve the way we interact with the words on the web.

To user hyperwords the user points to a word, selects an item from the menu that pops-up, for example 'Search...' and follows the menu to the next level, like 'Google' and clicks. The hyperwords system then searches the word the user pointed to in Google.

Users can navigate even quicker by typing in keyboard equivalents instead of pointing to different parts of the menu, such as 'S,G' for 'Search... Google'.

Video of Hyperwords used by voice: Video Demonstration This looks very futuristic and it's easy to wonder how sophisticated the computer must be to carry out the commands shown. The interesting thing is that the voice interface uses exactly the same hierarchical structure the menu uses, giving the computer much more context and a more defined environment to work with.

Our approach is to let users navigate through structured and unstructured information on the web.

Slideshow of our approach: Approach

Our aim is to allow us to navigate through words and interact with words as richly as a sculptor works with clay and the athlete her body. We aim to break the paradigm of paper and allow words to live a rich, connected life where we can more efficiently draw out meaning and see hidden connections than is possible today.

Technically, Hyperwords Menu is a pop-up human-computer-interface element which is automatically added to the requested document by the server, to initially, give more functionality to blogs, and later to web pages in general (though it has been tested on a few web pages already), in support of Doug Engelbart's HyperScope (it is one candidate interface mechanism).

Text on a screen. Imagine if every word on the screen was truly connected to this 'cyberspace' we heard so much about during the late 1990's? Imagine if you could flip around on any word - rearrange your views as if you were a pole-vaulter, around any word - go anywhere based on any word. That would be cool indeed. And probably very productive. The Hyperwords Menu-Up Menu is an exploration into how one way of pivoting around words could work.

The prototype was developed concurrently with the HyperBlog but is really a separate project. When it works over the HyperBlog (alpha version only works on a limited types of web pages) you'll still have the 'edit' screen which will still be useful for creating editorial views, but you'll be able to flip any word to describe how you want the blogs to appear.

Going through the fundamentals of human-computer-interaction again and again for this project brought the basic sentence I used to tell students who were completely new to GUI interface computers: "You must tell the computer what you want to manipulate, and then tell it what to do."

When Doug was working on interface ideas for the HyperScope he was always considering the on-screen panel as the main control interface. Thoughts were also swarming in my head about pivot points (using the use of a word on the screen as a pivot point to change navigation or the view). A pop-up menu popped into my head. I requested Mikhail to build one based on whatever he thought would be good.

It all came back on a thought of 'dynamic hypertext' I had worked on many years ago as a conceptual project. A working prototype is now available online.

But what is it really? It's a way you can point to a word in the blog (or on the invisiblerevolution.net web site) and get a menu (where you can choose to see the glossary entry for the word, re-load the document to show only paragraphs with that word, or only without that word and so on). It's a facilitation infrastructure; one the server knows what to do and on what, it's easy. This is a very direct way to tell the server what to do. BTW, it is important to note that the actual features of the current prototype Hyperwords Menu are almost completely irrelevant, we can focus on what it should do later, when it works.

Well, this pop-up menu does bring a few new things to the page;

Why not make the interactive words visible, like links? Sometimes people point out that it would be nice to see what words the Hyperwords Menu work on. The reason it is invisible is that I feel that every word should be active when the user needs it to. This is only the beginning.

Hyper, as a prefix, is defined as: "1. Over; above; beyond: hypercharge. 2. Excessive; excessively: hypercritical. 3. Existing in more than three dimensions: hyperspace. 4. Linked or arranged non sequentially: hypertext." The American Heritage® Dictionary of the English Language.

Hyper then means, to us a least, 'connected' - in a multitude of useful ways'.

Hypertext is defined by Ted as "Non-sequential writing with free user movement."

Hypertext as defined by Dictionary.com: "A computer-based text retrieval system that enables a user to access particular locations in webpages or other electronic documents by clicking on links within specific webpages or documents.". The American Heritage® Dictionary of the English Language.

Doug talks of interactive text which you can do all kinds of things with. He also talks of hyperdocuments. He feels that 'hyper' refers to the augmentation that computers can provide.

Hyperwords are words you can issue commands on in many different ways.

In the nineteen sixties a bohemian at Harvard by the name of Ted Nelson came to the realization that computers can do incredible things with text - potentially. He thought a lot about it and some time around 1963 he invented the term hypertext. He defined it later as "Non-sequential writing with free user movement."

Fast forward to 1968 and Doug Engelbart presents computer augmented text to a stunned audience in San Francisco. Doug thought in terms of navigating through information in many novel ways, like 'jump to the first instance of this word' or 'go to the third paragraph and copy the name of the document it refers to'.

Skip ahead another two decades to 1988 and Bill Atkinson writes and Apple ships Hypercard which worked around linked sets of cards laid out in stacks. A powerful and much utilized expression of computer augmented text. One of the few limitations was that it was a local system, it did not run on a network.

Another half a decade goes by and an idealistic Englishman named Tim Berners-Lee working at an atom smasher in Switzerland implements an interlinked environment with an original vision encompassing the decentralized, organic growth of ideas, technology and society. "The vision I have for the Web is about anything being potentially connected with anything."

By this time Vint Cerf and Bob Kahn had standardized how networks communicates with networks, with an inter-net. Interactive, computer augmented text could have a wide reach.

Marc Andreesen and buddies at the NCSA in the US found all this rather fascinating and decide to build a visual point-&-click 'browser' to broaden the appeal of the World Wide Web environment. The result was Mosaic, then Netscape Navigator, later copied by Microsoft and named Explorer. The result is the Web we use today (of course, as it's driven by techies a lot of complications have been introduced since then).

You can point and click on links and your browser will reload with a different page or, more rarely, on a different part of the same page. You cannot edit the page (unless you are visiting a magic sounding special page called a WiKi) as Marc Andreesen and friends removed that feature. You cannot freely navigate like you can in the real world (take a left at the second Starbucks) or in Doug Engelbart's system (follow the link in the first paragraph).

But it's on all our desktops and it's not only sucked in a lot of our time and energy, it's also sucked in the concepts that came before them, and as with any powerful sucking device, the concepts have emerged all the slimmer for the experience. The ambitious hypertext has become near synonymous with hyperlink or just link. Doug Engelbart's work on sophisticated text interaction has been reduced to clicking and watching new stuff on the screen.

Then in the summer of 2004 we put a stake in the ground evangelizing interactive text. We are Liquid @ UCLiC. Naively and enthusiastically we wanted to be provocative and suggest there is more to text on computers. 'It's more than pre-made link and scrolling' we would drone on over coffee to anyone too bored to move to the next table (apparently, coffee takes a while to kick in).

We thought long and hard about hypertext and promises broken and marketing terms (no point if we just sit and nod to ourselves - the software needs to change, much more of it than we control) and what about the term 'interactive text' and what about this and that? We had started developing a HyperPop menu in a HyperBlog so we kept all of our discussions for you to review in the discussion archive.

Doug said "what does 'hyper' mean, what does it bestow on the word it prefixes? What would 'hyper-editing' and 'hyper-viewing' and 'hype-documents' mean?" and that made us think.

We came up with hyperwords. What do you think? Does it spark a provocation in your head about more dynamic text? Words you can interact with? Hope so.

As far as Ted is concerned "'Hyperwords' seems like an OK term, but it doesn't seem to be in my area of concern. I would suggest you choose a very precise meaning." We agree.